Cheetahs In The Headlines

I couldn't turn up at Hougang Stadium for the match on Monday. I thought that's bad as I've missed another home game. Unfortunately, it's worse as I realised later that night that the match was abandoned due to another "foot-brawl".

It came at the wrong time. Cheetahs were on a high after the Tampines win and were looking forward to another upset. In addition, the club caught the attention of new Hougang MP, who plans to work with the club to promote football in the community.

Cheetahs have hit the headlines in the papers for the wrong reasons and will continue to do so the next few days. I didn't witness the incident and thus not in a position to comment but I'm following the developments. It has been a great season for the Cheetahs so far and as a fan, I do fear the worst. A points deduction would hit the team hard and is unfair to the team which put in a lot of hard work.

All Cheetahs' games are suspended for now pending the outcome of the investigations. On the brighter side, the team can use the time to rest and prepare for the remainder of the season. More people will also get to know Hougang United from the news. I'll continue to stand behind the team with fellow supporters and visit the clubhouse.

Let's hope for the best. 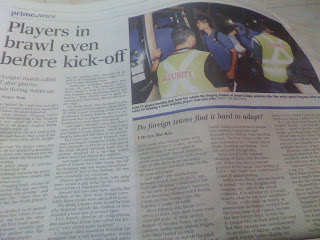 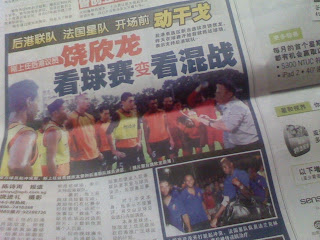